Thank you alps for being high and having lovely glaciers that make it possible to ski pretty much year round. I was back on snow skiing in Cervinia (Aosta Valley, Italy) and Zermatt (Visp, Valais, Switzerland) from 4th to 10th November. 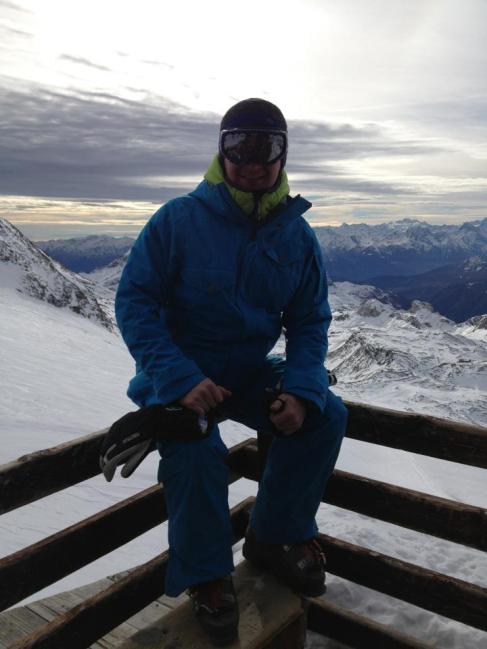 I took part in a performance course organised by Interski. A great way to jump start the 2012/2013 ski season. It was a good test for my knee and the perfect way to get back in the swing of things. I spent the week skiing and socialising with some very talented folks. Including five time British Winter Olympian Graham Bell. There was a considerable age spread on the course. It just proves age is no barrier in the sport of skiing. It truely is a sport for life. You maybe just have to be prepared to take things a little easier as you get older. You can still however strive to improve your personal ski performance. The oldest participant was Bob a spritely 71 year old considering he has had two hip replacements. His main issues came when taking part in the stretching exercises each night. It was actually quite funny to see that the two least supple participants sat at either end of the age spectrum. Ross a 21 year old preparing for his BASI 3 Tech Exam and Bob a 71 year old. Neither of them could even get close to touching their toes. There were all sorts of unnatural sounding clicks, cracks and groans heard during the exercises. A swift trip to the sauna and steam room straight afterwards helped to ease the pain.

The lift linked ski areas of Zermatt and Cervinia straddle the Swiss/Italian border. It is possible to ski in two countries in one day – pretty awesome, however it is recommended that you carry your passport, just in case you get caught on the wrong side after the lifts have closed! It’s a long expensive taxi ride if you lose track of time. If it does happen I recommend you book into a hotel for the night and ski back over the next day!!

Zermatt is a picture postcard car free alpine village. You need to leave your fuel guzzling beast in Tasch and hop on the Glacier Express which will whisk you up to the village. Watch out for the silent electric carts used for transport. They have a habit of sneaking up on you and catching you unawares. Zermatt lies at an altitude of 1,620 m (5,310 ft) and sits at the foot of Switzerland’s highest peaks. The tallest being Monte Rosa with an altitude of 4,634 m (15,203 ft). The most famous peak though is The Matterhorn. A magnificent tooth like chunk of rock that sores to 4,478 meters (14,690 ft). Everybody’s  favourite last minute holiday gift purchase the Toblerone was modelled on it.

We stayed at the Rendez-Vous Hotel in Chatillon in Italy. A winding 30min drive from Cervinia. It was a bit of a strange mix of 1970s architecture, cosy alpine chalet and uber modern spa. Not sure if it quite worked but it provided a comfy bed for the night and a hearty breakfast to get each morning started. The evening meals were a bit hit or miss, but to be honest, I was usually so hungry after the days exertions that I didn’t really care what I was eating.

The first day I strapped my planks back on I felt a little rusty but I was happier than a kid in a candy store. It was so nice to be back in a snowy mountain environment. I got a little bit carried away, knelt down and kissed the snow….just as the Italian Womens Team stepped out of the cable car. Perfect timing…

The snow and weather conditions were fantastic for the entire week. We really couldn’t of wished for better. The mountain had been closed on numerous occasions the previous week due to high winds…so we got lucky! The only part of me that kept suffering from the cold was my feet. My toes ended up like blocks of ice. It reminded me of my seasons in Canada. Particularly that two week spell you always used to get during February in BC when the temperatures took a nose dive to -20 or below. It was always a painful experience letting your feet thaw out in the pro room. The tingly needle like stabbing pains as warm blood infiltrated your toes was excruciating…but I wouldn’t of changed it for the world. Looking back I should of maybe bitten the bullet and bought boot warmers but I believed they would compromise the performance of my boot…I didn’t seem to worry about potentially losing my toes to frostbite back then. Before heading to Cervinia I really needed to get hold of some new gloves. My old favourites had been stolen a couple of seasons ago when I was instructing in Edinburgh. Their replacements weren’t really much use in the cold. When I was at the ski show in Glasgow last month I decided to get myself a shiny new pair of Hestra gloves. They are a pretty cool cross between a normal glove and a mitt. They keep your hands cosy like a big old mitt whilst the clever design allows adequate dexterity due to the free index finger. An awesome idea and it works brilliantly. The gloves are exceptionally well constructed and are super durable and warm. I thoroughly recommend them. They also have a wrist strap so you can let your gloves dangle when you aren’t wearing them…means your less likely to lose them…however guys watch out when you go for a pee..two dangling gloves can create a bit of an issue if they cross the pee trajectory..enough said.

At high altitude it is not just the cold that can cause issues. The thin air can certainly sap your energy if you haven’t prepared. Now my leg passed its first proper ski test with flying colours I am really motivated to get my fitness heading back in the right direction. Skiing is a dynamic sport that uses pretty much every muscle bone and tendon in the body. You need to be strong, agile and flexible to be a great skier. That takes time effort a dedication.

One of the biggest surprises during the week was to be found in the local supermarket. Whilst sauntering down the beer isle..for informational purposes only obviously… I stumbled across two unexpected sights. Two legends of the beer world. Tennants Super a drink usually associated with overindulgent Scottish drinkers and Duff Beer. Homer would of felt at home….I 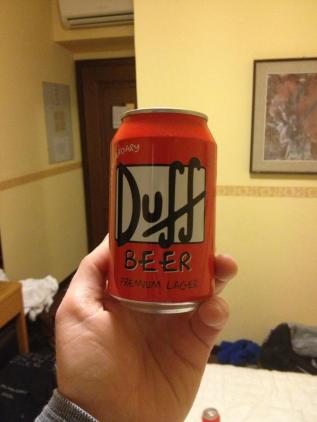 3 thoughts on “High altitude snow fun in Cervinia and Zermatt”