Plastic Fantastic 2 – The return of the mat

Well in typical fashion I was running a little late this morning. Why is it that when your late everything seems to conspire against you? I get to my car and….it was frozen solid…then every traffic light I came to was red….aaaargh! I eventually got to the ski centre 4 minutes before my first lesson. A mad rush up the stairs…selecting a pair of skis and adjusting them to my boots… then boom I was ready for the day. Not an ideal start but thankfully the day got better. Let that be a lesson to me…an extra 15 mins in bed is not always worth the hassle…one day I will learn!!

First up was the Dr. Who loving downs syndrome boy from last week. He was super pleased to see me and WOW I don’t know what he has been up to during the week but something has clicked. He came with his dad and older sister today. It was a really cold night so there was ice everywhere when walking to the beginners slope. Ice is never a fun prospect when you have ski boots on. After negotiating the vast glacier we did a few warm ups. I was so pleased with his improvement. I was hoping to get him up the chairlift but unfortunately it wasn’t on this morning…so the only option was the poma tow. He coped really well and when I clipped an edgy wedgy to the front of his skis he was soon rocking. He managed to do a controlled snowplough. He was so happy and excited every time he made it down and stopped. He gave me a massive hug at end of the lesson. Moments like that are really special.

Second up was a 4 year old. I tested him on the nursery slope. His parents said he could s/p and stop as he skied on snow for two weeks in France. Over the years you pick up a sixth sense when it comes to parents talking about their kids ski prowess or even people talking about their own abilities. He was unwilling to form a plough and to begin with he didn’t want to use the tow. He’s only 4 so his attention span is understandably really short. He was more interested in the snowboarders falling on their bums than skiing haha. His parents asked why I didn’t take him on the new slopes and the dad in particular seemed less than happy with his progress. However, I learned from his mother that he had been up half the night being sick. Again managing parents expectations can tricky and you can’t please everyone all of the time no matter how hard you try.

The third lesson of the day was with two kids trying to improve their parallel skiing. It gave me the opportunity to play on the new slope extension. The kids said it was EPIC. I worked on a number of things with them such as keeping hands forward and trying to be smoother with turn transitions. They had a tendency to rush and jump to the next turn ..indicating there balance wasn’t quite on the sweet spot of their skis. I did a few drills and exercises to get the balance on the outside ski such as bird of pray, skiing with no poles and hands on hips. The girl was quite nervous and tended to have a leaning L stance (on inside ski/tipping) so we worked on getting a C shape during turn completion to ensure more balance on outside ski. Also both learnt to extend at start of the turn and hold till half way round the turn. Great progress. Gave them extra run at end. 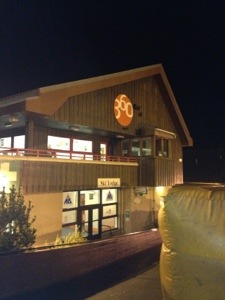